Contents of this blog are my personal opinion and are not read or approved by others prior to posting. Opinions, conclusions and other information expressed here do not necessarily reflect the views of my employers. 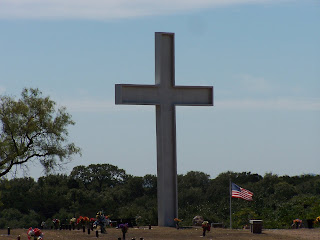 I remember so many details of that day as if it were yesterday.
Texas Tech whipped the University of Texas in football, (easy to remember since we've only won fourteen out of fifty six games), the Goin' Band had performed magnificently (that was a common occurrence), and I was off to Barn Dance.

When I arrived, I saw several sad faces. My first thought was, "That must be our friends from the U.T. band we invited." After a while, however, I began to see sad faces that I recognized. Upon parking the car I was told, "Heath has been in an accident...he died."

Numb. Numb from sadness, numb from anger, numb from dread. If you were a friend of my fraternity brother, Heath Denton, I suppose you remember where you were and what you felt when you heard about Heath's death as well. I encourage you to share your story in the comments section of this blog.

Yesterday a few brothers from the Alpha Omicron chapter of Kappa Kappa Psi gathered together to visit the place where Heath was buried. The cemetery is in Burnet, TX, about an hour's drive from where Ryan Butler and I live. Joining Ryan and I were Heath's big brother, Tim Stewart - currently of the San Antonio Area; Steve Makelki - currently living in the Houston Area; and Jon Caspell who flew out from Lubbock to attend.

There are many powerful take-aways for me from yesterday's gathering. I will share the one I think is most important:

Jesus Christ, the only Son of the living God, gave His life so that we may live eternally in Him. God knew Heath while Heath was in his mother's womb (see Psalms 139). God had a specific purpose for Heath's being here on earth. 20 years later, we recognized that Heath's death in a strangely similar way led us to life as well. Yesterday we gave testimony to the fact that Heath's life, death, funeral, and legacy created in us a desire to live for Christ.

Heath's headstone reads, "...God's Friend." That is exactly what he was here on earth and what he is today in heaven.

Here are some photographs from our visit. Again, I encourage you to share your comments to others who read this blog by linking to the comments section.

Thanks for being my friend! 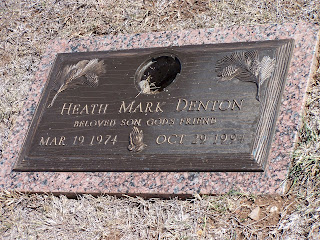 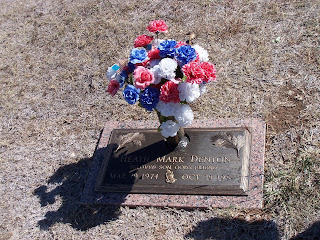 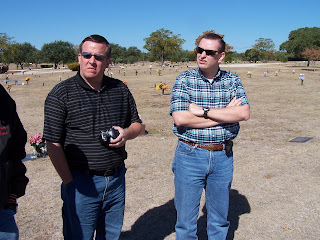 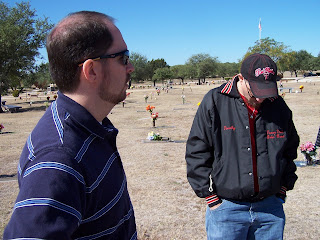 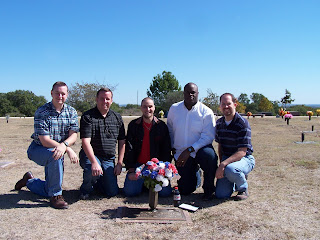 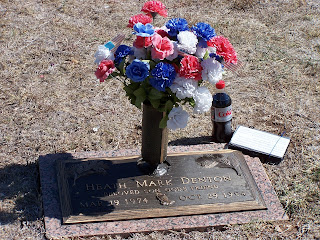 Posted by Adaryll Jordan at 5:49 AM

AJ...thanks so much for this...my friends from High School had posted pictures of Heath on facebook. We were all remembering such great memories of Heath. He will always be missed by so many. I will never forget the day that he died or the funeral. I had friends on both side TU and TTU...as Heath and I were from the same High School. I remember having to call all my friends from high school and letting them know what happened. Calling his best friend, Virgil in Abliene and he didn't have a way down to Austin. Mr. Bearden allowed him to come on the bus so he could be a pallbearer. It was an experience that I will never forget. Rob Hill and I wearing our high school letter jackets to the funeral. Anyways thanks for the memories. Heath was a great guy that touched lots of hearts and he will never be forgotten. Kim L Murphy Jones